Even with some small downward movement today, the indexes appear poised to breach 25,000; 7,000 and 2,700 for closes. This sounds like a great time to be a bull in the market, since this upward trend has been consistent with an average S&P 500 P/E ratio of around 25.9%, low jobless claims, and modest inflation.

With all of the highs, you’d expect the various sectors within the S&P 500 to be showing gains. After all, the indexes themselves are up, so the sectors should be showing the same strength. Prior to the past month, this appeared to be the case. In fact, prior to Friday, December 1, 2017, it all appeared to be going well.

Suddenly, on December 1, 2017, the Information Technology sector and every other sector went into negative territory. Yes, the IT sector, the strongest one this year (+35.72%) and the past three years (+56.54%) began performing the worst. This trend continued into the next week for several days and continued for several other days throughout the month, leaving the entire 1-month sector gains into the negative for every sector other than Telecommunications Services (+2.18%).

To see a chart of the performance today on Tuesday, December 19, 2017, please review the table below (courtesy of Ameritrade’s Research Tools): 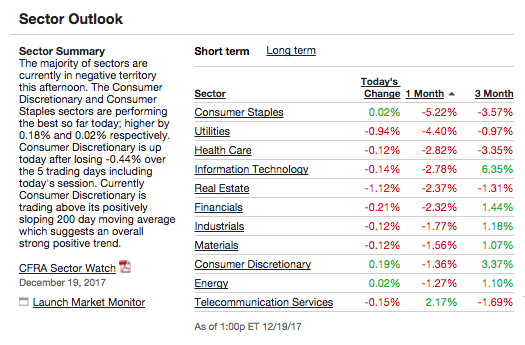 Why does a month matter?

A month of losses may not be a huge concern. It may not be, but it’s been striking to note on a daily basis, especially as the losses have slowly compounded, slipping several of the sectors into negative 3-month loss territory. It’s also been striking as the all-time index highs seem to be eclipsing the fact that the sectors are negative for the month.

Why is this happening if it is a downward trend?

The initial IT and other sector drops began on the day ABC news aired the false Flynn story. A story that they didn’t correct until that evening, and which caused a large dip in the market that day immediately after their report. Prior to that report, the stock market had basically been a bull market for the indexes and most all sectors pretty much most of the year. The fact that the sector with the most gains, IT, suffered the worst sell-off was indicative of what was happening (fear and capitalization on gains while the time was ripe).

After the Flynn story, the market itself did somewhat recover, but the sectors have continued overall to see losses. A few factors that may account for why the indexes are showing gains, while the overall sectors are showing losses:

Does this mean that the bull market is ending?

Yes, it could mean that. I’ve been bullish for some time now for the overall market. Heck, I even questioned why some consider that the S&P 500 is overvalued in this recent article.

Unfortunately, the entrance of Bitcoin into futures trading (CBOE and CME) is a major cause for concern. The current price trend pattern for Bitcoin is another one:

In addition, the slippage for the IT and even Consumer Discretionary (Retail) sectors in December when sales are typically most robust are further distress signs. A news story just out today talks about how the Retail sector experienced more bankruptcies in 2017 than since 2011, a strange feat when the economy is supposedly doing so well. Another good take on the retail store closings (mainly, brick and mortar businesses) can be found in this article, which dubs the phenomena the “Retail Apocalypse”.

The false Flynn story likely helped provide the impetus for fear to cause investors to change course somewhat by re-thinking their investment strategies.

What would I do?

At this point, I would only consider buying large-cap stocks, which are still showing gains. I’d be cautious to review the price chart trends for any stock and ensure only to buy companies with strong earnings and good cash flow.

I would also avoid bitcoin-based companies that show negative earnings. The current trend for a company with weak earnings strength to announce bitcoin involvement, in turn causing their stock price to go into the stratosphere, highly reminds me of the dot-com bubble in the late 1990s. That was a time when a company could announce plans to be involved in the internet (or to open a service on the internet) and then see their stock price skyrocket. Many such companies never made it out of the crash and no longer exist. For similar businesses in the Bitcoin era, compare DPW, MARA, OSTK, OTIV, RIOT, and the IPO LFIN as recent examples, although OSTK does have improved earnings and revenue growth, but their free cash flow is especially troubling.

For the sectors, the only sector that I have faith will be okay at this point onward (if the sectors continue to show losses despite the index gains) would be oil. That is due to the 1 and 3-year oil sector losses (-4.65% and -16.91%, respectively) with the oil sector only now showing signs of rebound. There are a few reasons for this belief:

As a final note against putting too much stock (pun intended) into Bitcoin for investments, Forbes has a great article on the matter. I’m not anti-cryptocurrencies either myself, and I do think some cryptocurrency will become the standard. I just don’t think it will be Bitcoin. It may be Ethereum or LiteCoin, or something that hasn’t even been created yet. When that cryptocurrency does ripple across the world into standard monetary and transaction mediums, it will have much the same impact as the internet itself (and the internet-based businesses that survived) did over the past two decades.