Before I began eating healthier around May 1, I was searching for a meal replacement that I could eat daily to meet most of my RDA vitamin, mineral and nutrient requirements. During that time, I looked at nutrition bars and supplements like Soylent, but I wasn’t able to locate anything approaching a sustainable, decent meal replacement.

Fast forward to about 2 weeks ago, and I discovered a new supplement called Huel (Human Fuel) via a Facebook ad. That company is well-known in the U.K., but relatively new to the U.S. marketplace. When compared to Soylent, Huel has far less sugar and non-fiber carbohydrates. I decided, despite the hefty approximately $60 a month price tag, that I would try it out for a month.

The two, 3.9-pound bags I purchased arrived in around 2-3 days after my order, so delivery was relatively speedy. They included four free scoops and one free bottle with my order, and I elected to buy one extra bottle so that I could have one at work and one at home. I also elected to get one bag of unflavored Huel and one bag of vanilla Huel.

I tried the unflavored Huel at home around a week ago, and it was tasteless and gritty, but my diet some months has involved eating foods that I wouldn’t normally consider appetizing, so I am okay with the overall unaspiring taste to the product. At work today, I tried the vanilla flavored Huel, and it is likewise lacking in flavorful-ness. Comparing it to my 2-3 times a week of ground Flaxseed (I buy it whole, then grind it myself) with heavy whipping cream and honey, Huel certainly pales. Now, I didn’t use either heavy whipping cream nor honey with Huel, so that may be an unsound expectation. I used water as the directions recommend (5 parts of water per 1 part of Huel). Next time, I will try using heavy whipping cream and honey to see if that makes a difference, although I do believe the gritty taste will still be worse than flaxseed’s consistency.

Below is an image of the nutritional values from the vanilla-flavored Huel bag: 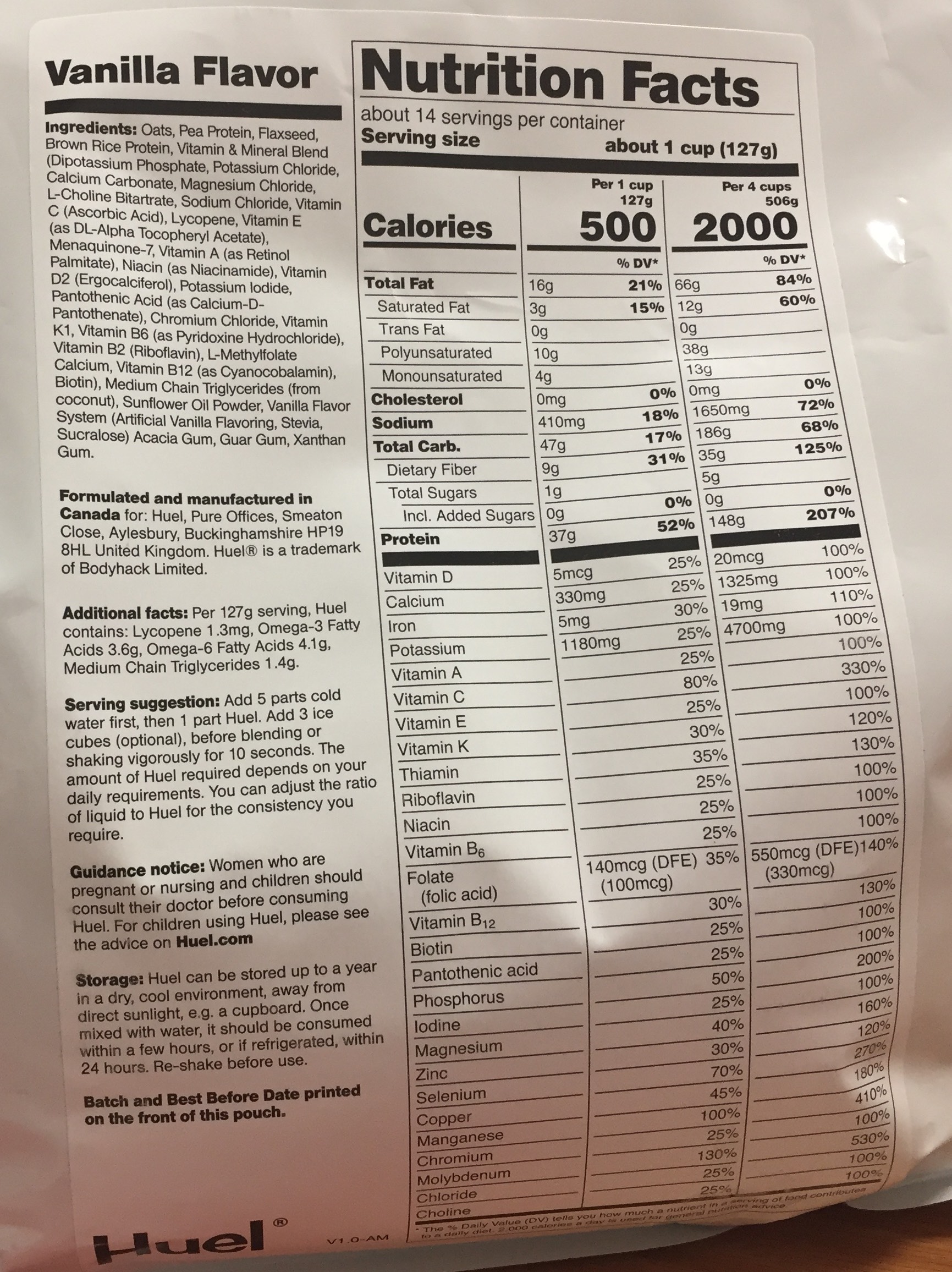 I am not certain that I will continue using it over the long-term, because it really isn’t good enough for me to eat it frequently, but I’ll make that decision after I try the heavy whipping cream and honey route.